Ok will do so, thanx.

PS5
If I play the briefing during the mission, it turns off the music until the end of the mission.

I dont exactly know if im posting this right. The website wasnt easy to use for me 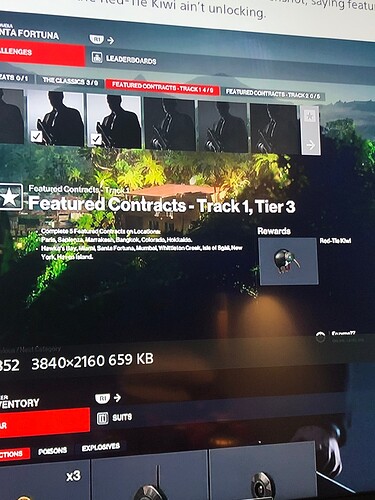 image1920×2560 392 KB
Basically the phot is this inage shows a challenge feature contracts track one tier three and these are missing frim hitman three. Hitman three has escalations tier one and two. And the rewards for both the featured contracts and escalations are completely different can someone help me?
Sue_Y August 31, 2022, 6:32am #1289

Did you overcome? Having same issues

Description: Permanently equipped pacification suit mod. I’ve unequipped it from Simple Mod Framework, the cache folder and mods folder (within the SMF files). Can’t seem to get rid of it in the game.

An update. I totally initialized the PS4, installed the game again, but again at fetching my profile the game crashes. Honestly I’m shocked, Zendesk doesn’t help me, PS doesn’t respond to me, and I don’t have a clue what to do. Is there a way that I can contact IOI directly? I mean, what should I do? 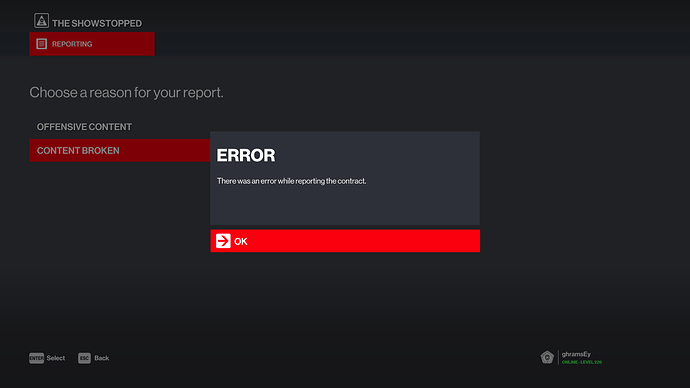 The problem is there are targets, guards mainly, who are immune to bullets, but you’re not immune to theirs. Also, starting from the barge with a sniper rifle crashes the game.
That happened 2x in a row. It’s also randomly crashed 3x in total.

But the bug I’m reporting is that it’s not allowing me to report the contract per the screenshot.

Frequency: Happens every time I try to report it.

The lag and the spongy guards is due tonthe fact that the hitman contracts engine ain’t used to that many NPCs being targets at once, no matter how good your setup is they will always lag

Paris is the only one that exhibits crashes and “immune” guards and it’s also
the only one of those four I cannot complete due to these eh bugs.

I know you didn’t make the contract i was just stating that the kill everyone contracts are laggy amd that its fine for it to be so
ICA facility, Hawkes bay are small maps that have under 150 NPCs whitch i think is the threshold for the Ghost Bullets to occur, just keep on killing people without shooting them and over time you’ll be able to suit normally again

Right. Any word on why I cannot report the contract?
I have experienced this issue on other community content as well.
Simply throws that error w/o a way part it.

No clue, I’m a Xbox so I’ll test the same contact on there and see if it is any different ¯_(ツ)_/¯
Also why wrre you reporting it? Just curious thats all?

Well you’ve solved the why; too big a map with too many targets I guess.
It kept crashing so I was reporting it primarily for that reason.
There’s nowhere to tell it ‘why’ in the report. in game it’s a set-and-forget report.
I was expecting some sort of reply even an auto reply to detail the issue reported.

But it throws that error w/o even allowing the report to go through.

On Paris, what seemed to work was shooting the basement guards inside first.
Then working my way out vs outside in. Seems to wittle down the numbers, but I still had a crash.

They’re MODDED contracts. IOI is not responsible for how MODDED contracts work. I have encountered these issues as well, and the general solution to this is to melee the first 50 or so NPCs and to avoid blind-firing (firing without pressing the aim button first). Most of these contracts are very unstable because they’re huge hassles to manage the state of 300 different targets. ICA Facility, Hawke’s Bay, Whittleton Creek, The Icon, The Author, Colorado, Hokkaido, New York, Dartmoor & Chongqing should be alright, but any other maps you need to be patient.

OH. I see. Modded. I didn’t realize it’s modded but that kinda makes sense.
That’s how they’re cramming the extra targets into the list.

Paris is a massive wall of people.
You’re right about how to kill them.
I began w/ the basement and worked my way up.
It was when I started having piles of bodies on the rooftop that I had issues.
Even though that can happen in the unmodded game on this map too.
I guess something different with them all being targets.

This is just enough time to be blinded to an onrushing foe. I am using a PC (Ryzen 5 3600, 16GB RAM, Radeon RX 6650 XT Graphics with the latest Adrenaline software and drivers, and a Gigabyte B550I AORUS PRO AX motherboard.

I sometimes get a black screen during the loading of a level or contract. This does not affect gameplay. However, a blank screen during a planned attack or while you are being attacked makes the game practically unenjoyable at my skill level. It can be easily repeated when exiting “Instinct Mode.”

It happens almost every time I exit instinct mode and less frequently if I am moving while exiting this mode. It rarely occurs in Hitman 2.

I should have posted as a bug report and perhaps a moderator could do so for future reference.

I was using a cable adapter (DisplayPort to HDMI) as my Acer 1080p monitor has only HDMI, DVI, and VGA connections.

Having ruled out practically everything else to eliminate the blackouts after exiting instinct mode, I checked the cables and replaced the adapter and cable with a quality DisplayPort to HDMI cable.

The results were …no more blackouts.

I hope this helps others as the instinct mode is likely an overlaid image and I assume signal integrity between the graphics card and monitor was lost.