That’s the only part of the delay that I’m happy about; knowing that the question of if Ambrose will be included in Freelancer or not is moot. Instead of having to add it later, it’ll be ready to go at launch.

Tbh I’m not 100% annoyed at freelancer being released later and I’m quite happy that the maps coming quicker but with that being said the map being pushed forward makes me think they either rushed it or it’s not going to be top tier like the other maps so I’m quite worried for that.

However all of you complaining about this roadmap as if this is the first bad one lmao did we all forget about the SLOTH roadmap. I’m not surprised it’s just FC and Reactivations I’m just disappointed, I also don’t understand the point in bringing back the iconoclast to play when she’s 1 already in ET arcade but 2 getting released again it ET arcade 2 days before that lol

Which btw I was wondering if people would be interested in seeing that, all it is, my personal kills for all targets including main missions, bonus missions, sniper missions, ET, DGS, BEH and special assignments and its a clip of the death I do for them it’s taken me a couple of years as on console and can’t get et until their release but I think it could be fun

Looking forward to seeing what gaps they fill in with 47’s story.

Clemens, why can’t we play contracts or featured contracts in VR? Do you guys have statistics about how many of your players play almost exclusively in VR?

miss your acting in roadmap trailers! will we see you in June or July ?

I’m actually pumped about the delay to freelancer and the expedited release of Rocky. The new level will be more exciting to me than freelancer (I think). I’m hoping both are wonderful, but a new map will make me happy in July and keep for a while.

Just as I figured, with some time to calm down and reflect on the possibilities, my opinion of the roadmap has changed. I’m looking forward to the new bunny outfit, as I’ll now finally have an appropriate suit to use as a masked slasher, in the vein of Michael Myers meets Frank, so that’ll be fun. I’m mostly ok with Ambrose Island being released earlier, although still wary of its place in the narrative. I’m certainly still disappointed in the delay of Freelancer and will likely remain so until we get it, but I’ve accepted it now, and at lease Ambrose will be part of it by the time of release for sure now. All in all, still the first map I’ve been truly disappointed in, but now I’m ready to cope with it.

You really take a while to see the good in things, huh.

All in all, still the first map I’ve been truly disappointed in, but now I’m ready to cope with it.

It’s hasn’t released yet, so that’s less a criticism or opinion, and more denial that the map might turn out to be good.

It’s hasn’t released yet, so that’s less a criticism or opinion, and more denial that the map might turn out to be good.

Pretty sure by map he meant roadmap, as that is how his post started

Yeah, that makes sense now that I think about it more.

this is the moment heisenberg became a world-class hitman

So the next batch of FC submissions will need to involve explosive ducks? 'Guess I better get on that before I’m late again.

Or else maybe you can set up a contract with all the ducky edition kills? Pistol, sniper, explosives, etc. Because we all know if all of them are explosive device kills, then the majority of players will just use breaching charges.

Since you can’t get lock-ons with duckers… There’s another way to kill with 'em.

Because we all know if all of them are explosive device kills, then the majority of players will just use breaching charges.

Ah they aren’t gonna introduce the long awaited contract creation improvement for the next update, are they? Until then, the community can’t do it without your tool, Urben.

I have my Rubber Ducky contract ready for submission, just need the thread. I’m sure there will be a ton of other contracts submitted that will blow it away.

Time pending, I may recreate one of my H3 submissions that could fit, but need to think of improvements.

According to a recent Newsletter email, this is how you’ll be able to unlock the Bunny Suit With Mask when the update drops. 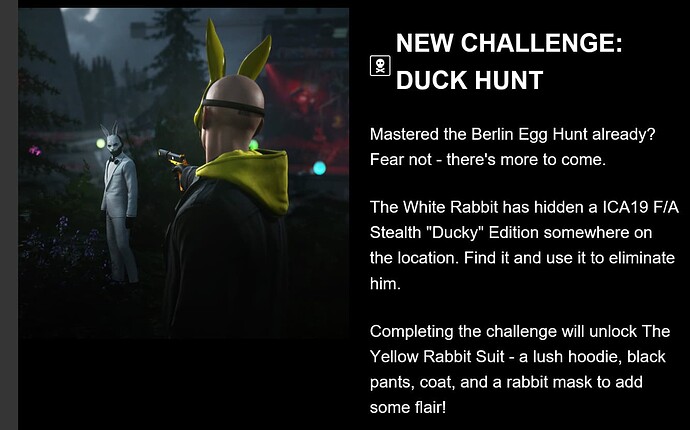 No problem, just find a single hand-held item hidden somewhere in one of the most difficult to navigate maps in the trilogy. No problem-o.

Considering it’s the Berlin Egg Hunt level, it’s likely that there’s a new Egg prop that contains the gun, or they’ll have replaced another item with it.