I enjoyed every single one of these Elusive Targets missions and ever since they Dev team decided to put the Arcade section in the game i have been playing and resetting these arcades nonstop!!
but for me the sad part is that these escalations contains only 3 targets few of them has 5 which is cool but not quiet satisfactory to allot of players like myself!
so I thought it would be cool to have an Elusive Target escalation rush mode where we can play all elusive targets in one escalation instead of just shorter escalations that exists already in the game!
why not play all of them in one single ultimate escalation contract O_O with each level completed a random complication or an optional objective will be added like (target must be killed with a melee weapon or an explosion) this is more content in Hitman 3 and i suppose it isn’t that difficult to add into the game

it could be challenging but really awesome to play! 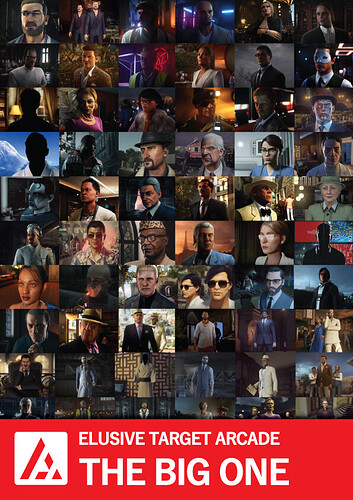 Please excuse me for harping on this so much. And please pardon the MSPaint job. Edit: (Oct. 17th, 2022) I’m going to dub this… Elusive Target Arcade - Freestyle [image] A better example of the free target select. You could pick 1, 3, or up to 5… I think there could be room for 10. Pick in whichever order you’d like. No repeats allowed. Once a target is selected they’ll have a red outline around them and be shown on the right. To deselect a target - highlight again and (select) to tog…

That would be an ET Marathon Mode from (a tentatively named) ET Freestyle. But by giving it in an ‘ARCADE’ type of experience you’d have point multipliers for each successful ET (mission) you finish. You’d have a point multiplier streak (though this should probably be capped after so many ETs, the point is keeping a winning streak). Even if you get an ‘Agent Down’ you’ll still get a final point tally.

Although, I think it’d be something to work towards rather than an option straight away (like a mode unlock).