Thank you for the clarification! Yes, some of them look very similar and the details of the clothes are similar, too, so in the first moment I thought they were all the same. Good to know that’s not the case! 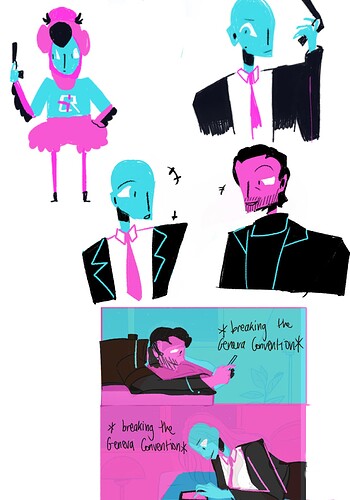 Why does Lucas Grey visible look older than 47 when they are both clones from Ort-Meyer.

Most of new trilogy’s story makes my head hurt. I started skipping the cut-scenes after the ‘truth’ serum was applied – after which I ‘applied’ some gin and tonic.

I think the idea was to have 47 as the perfect clone, hence he couldn’t age.

At least that’s how I always interpreted it.

I think he’s not perfect for Ort-Meyers standard. Grey is basically one year older than 47 and one of Ort-Meyers early clones, so he was kinda the prototype, while 47 is the consummate perfection.

And I guess that’s why Grey has facial and body hair and ages more visible than 47: because Ort-Meyer didn’t perfected that when he created Grey.

But still, Grey has extraordinary skills like 47 and he doesn’t look like a man his age. But he’s not as perfect as 47 and he is aware of that (like he says in the Legacy cinematic “you were always the best”).

Speaking of the cinematic. Grey’s speech sounded epic back in 2016, but now when the whole story’s been revealed I feel there are some discrepancies?

“Do you realize what kind of world you’ve been shaping, does the ICA? I have felt the consequences, I have felt the cost, that’s what defines me.” - the first part would imply that unknowingly 47 has been helping Providence to gain power or something, which is not the case? And the second part is completely baffling as 47 is the victim of Providence just like Grey, so obviously no reason for Grey to say that he suffered consequences of 47’s actions

Can anyone explain, interpret correctly or retcon this for me

It’s in reference to him shaping a World of Assassination. Also narrated by Grey. I think he’s referencing the consequences of his own actions, nevermind 47’s actions.

the first part would imply that unknowingly 47 has been helping Providence to gain power or something, which is not the case

Well it kinda is. I mean till Colorado he and Diana didn’t know about Providence and that Soders was part of it. And who knows how many people they killed who were in the way for Providence (like Dianas parents).

And the second part is completely baffling as 47 is the victim of Providence just like Grey, so obviously no reason for Grey to say that he suffered consequences of 47’s actions

I think Grey refers here to Providence, not 47. Unlike 47, he remembers at that point what Providence did to him and what kind of a person that made him. So he’s speaking about the consequences he suffered from Providence’s actions, not 47s, but 47 still had an impact on these actions (unknowingly) like I said above.

Well it kinda is.

Not really? Providence was already at the power for decades when they created 47 and 6. Even if 47 was helping Providence, he simply maintained the status quo and therefore didn’t “change” or “shape” the world.

We might have known though if writers elaborated on this matter. The Summer Bonus missions might have been on behalf of Providence, or rather theirs assets. Some missions from classic games might have been retroactively given a new angle of benefitting Providence in some way (Beldingfords weren’t selling a company’s shares, to-be mayor of Rotterdam was backed by some corporate or criminal power… whatever)

I think Grey refers here to Providence, not 47.

I think he’s referencing the consequences of his own actions, nevermind 47’s actions.

The way it’s worded though. “You don’t realize what world you’ve been shaping, but I’ve seen the consequences”

I still enjoy the storyline but yea, there are some holes

@Swangtheugly because 47 has a better facial moisturiser routine and he does botox.