What could a possible snowy Ether map look like?

I worry Clemens or Travis will log in here and see us speculating about a new map and thinking “oh shit, where did they get that idea? This is gonna be another fire we’ll have to put out”.

Just make it non narrative then or a second narrative like patient zero was.

In my head cannon Patient zero and all other bonus missions don’t exist. For me the only thing that counts narratively are the main story missions.

If they found a way to squeeze in Ambrose Island, I can’t imagine why they wouldn’t find a way to fit another mission in the story.

As for Non narrative missions, I am not into anything too abstract.

I mean that’s unfortunately just not true, seeing as they were part of the 47’s contract list that was deleted, showing that it was in fact canon.

To me they are all cannon but it’s no biggie if he wants to think differently.

It is a bit odd that 47 would end up in such a tiny Italian village town not twice, not thrice, but four times for 6 total high profile hits. Obviously it’s just bc the game designers needed to reuse the maps, but it does require a bit of disbelief suspension.

Possible target: Oscar Wong, Ether’s chief biochemist who was captured and tortured by the Delgados for information on the layout of the HQ building. He was later released with his memory wiped, but there could be a miniscule chance he returned to Ether.

If IOI releases a well-executed snowy Ether-centric map comparable in quality to Hokkaido/New York/Haven Island, and finally applies a patch fix to consistently use Per Haggmark’s full Hitman 3 head mesh in Hitman 1 legacy map disguises, I would have nothing worthwhile (i.e., nothing of significance that can still be remedied by IOI) to complain about regarding the WoA trilogy and would effectively be complete as a Hitman fan.

Bundle all of that in a release with Freelancer (assuming Freelancer proves to be well-executed as well) and I’d personally gladly pay up to 30 USD for all of that. Especially for the fixing of Hitman 1 legacy map disguises not using Per Haggmark’s full Hitman 3 head mesh.

So we may have the modern DNA storage facility pictured, and a nearby rustic, wooden lodge for the wealthy clients and Ether executives to visit. 47 could become Tobias Rieper for the fiftieth time and arrange a tour as a potential client. We’d get a target in each area and delete some data.

That pamphlet doesn’t lend itself to having a public-facing area. If it’s any indication of what an Ether map could look like, it actually seems to be more in-line with Colorado – an isolated, remote area where, at the onset, everyone is an enemy.

That said, I love the sound of your idea nonetheless. Pleasingly Hokkaido-esque while still sounding unique enough on its own.

If they go Ether lab I’d like to see them experiment with DNA mechanics. Maybe combining Hokkaido locked doors with DNA somehow. Wouldn’t mind another Ether kill like with De Santis.

Could even play around with Emetic Ether.

Maybe there are some clones and you get an opportunity to disguise as one, or maybe you can sabotage a clone and pretend they are 47.
Or maybe there is a proxy kill where clones join your side

IOI has downplayed the notion of 47 as a clone and clones in general in the WoA.

What’s more, this Ether DNA facility is probably synonymous with the Ark Society’s DNA Vault Initiative, and there’s dialogue in the Hyperborea lounge between Sophia Washington and an NPC that mentions “cloning and ectogenesis” is still “pretty goddamn far” out from our current time. That might be a nod to 47’s clone origins, but I believe it’s also IOI saying to us “not a chance.”

All we can really glean about the Ether facility is that it’s for DNA storage of the world elite on ice (with the option of off-world backup—the data of the DNA stored in an orbiting satellite).

I’m hoping we don’t get Ether in S Africa. Grey did that on his own before he was part of the team. It’s a cool cut scene and I say leave it at that.

Everyone wants snow and/or airport. Maybe a small place in the mountains with a 3 gate aeroport on one end of the map and a ski lodge resort on the other?

It’s going to be an Ether Ski Resort, as its stealing the elites’ DNA from their skis. If you want to know why not just take it from the cutlery they use to eat, well, that’s because Ether has already built the facility in the snow, so why not use the perfect surroundings? Everybody wants two things: snow and a ski resort.

It’s going to be an Ether Ski Resort

It’s in their official statement, actually.

If the clone route is taken somehow, it could be possible that the targets could be clones of each other, with no clear signs as to who the original is (and finding out who it is could net you an interesting kill opportunity).

I thought Grey and his bois quite literally blew the roof off the joint anyway.

An Ether map, especially a snowy one, would have to take place at one of Ether’s other HQs, not the one in Johannesburg.

All that’s known is that there was an attack/bombing. It doesn’t mean that the place was destroyed or that the damage was even that extensive, the attack mainly occurred for grey to recover the serum, so it was mainly a distraction from that.

If anyone wants a peak behind the @Client_Locksley curtain…here’s my pitch, free for all to see, of what this Ether DNA idea could look like, in a private convo with my partner. Locksley’s comeback? Nah, we didn’t like digging up Ether again or crowding the 2 month gap after Ambrose Island. But if someone here does, by all means, please take this idea and run with it (just give us “inspiration credit” haha). Anyway, enjoy: 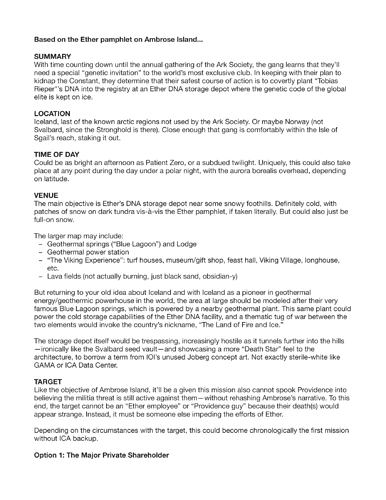 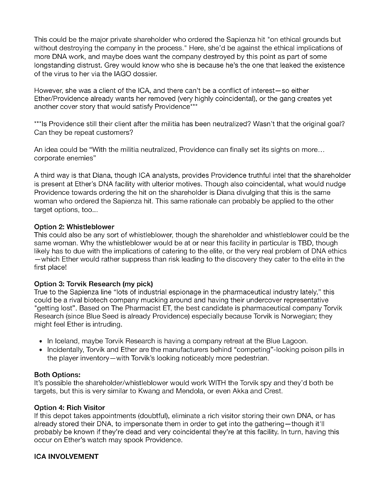 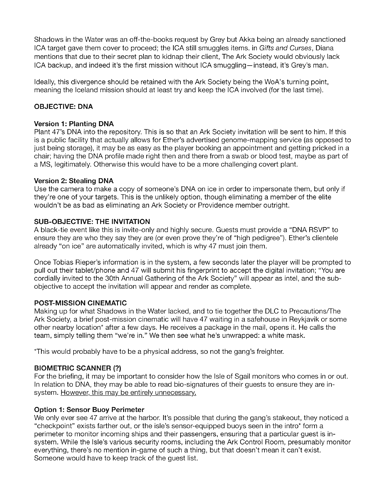 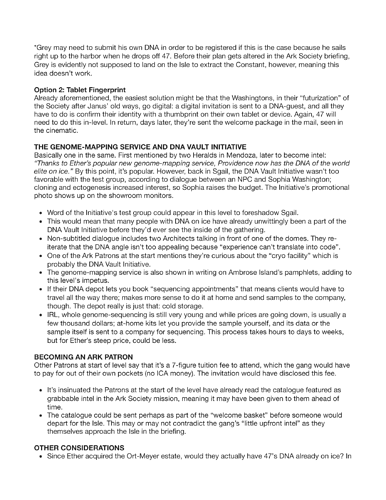 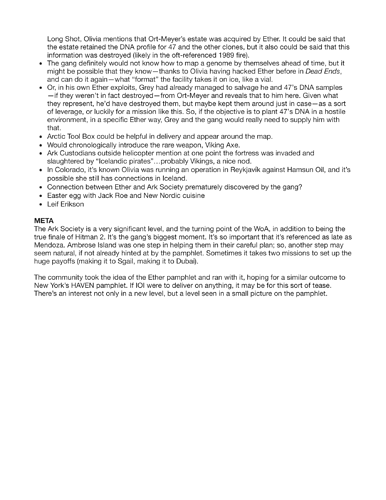 Take it, it’s yours!

Amazing work, reminds me of The Providence Papers which was an amazing read as well at the time, so much to inspire from, wish modding was advanced enough to make those a reality one day