Why are the unlocks so repetitive in the franchise?

I find it really disappointing how every game in the series recycles the same few mastery rewards - lockpicks, remote bomb, sniper, shotgun, etc.

Even within the games themselves, so many of them overlap… Yet there’s a bunch of unique things they never added, like body armor. Do we have a theory why the unlocks aren’t more unique in each game?

Lack of research because research costs money.
In reality the world of small arms, survival gear, and gadgetry make incremental steps every year. There’s firearms now for example with image recognition that will not allow you to pull the trigger unless a hit is guaranteed.

A sniper rifle with this aid would be pretty awesome and oddly enough actually realistic.

But they are not in HITMAN.

They didn’t engineer 47 to be the ultimate killing machine.to now put a semi intelligent system between the trigger and his brain that could interfere with his decision making.

Assist systems like these are designed for mallcops and bodyguards that can’t be trusted with a loaded gun anyways.

Manly because it’s a trilogy and they can’t assume every player has every edtion.
Thus someone who only bought Hitman 3 can’t be expected to have, say, emetic poison pills unlocked from Hitman 1 or Hitman 2… so it becomes an unlockable item in Hitman 3 as well.

Manly because it’s a trilogy and they can’t assume every player has every edtion.
Thus someone who only bought Hitman 3 can’t be expected to have, say, emetic poison pills unlocked from Hitman 1 or Hitman 2… so it becomes an unlockable item in Hitman 3 as well.

Even if that’s true, there could have been other ways to deal with this. For example, instead of having three mastery levels that unlock the same thing, you could replace those with a set of “tiers” with a theme. This way all players get to unlock at least the first tier that contains the essential item. You put increasingly less essential items on the other tiers and maybe a suit at the end.

Or, I dunno, you just reshuffle all the essential items on the H3 levels.

There’s firearms now for example with image recognition that will not allow you to pull the trigger unless a hit is guaranteed.

I agree, would also prefer something like this to prevent some excess in repeated items. With the exception of syringes which can be useful having several.

It’s actually similar to the Auto-Trigger mod in RESIDENT EVIL: REVELATIONS. It’s an ammo saver and once you’re accustomed to it you can chain headshots knowing everytime it fires it’s a hit.

In HITMAN of course many times you actually want to miss if you are using gunshot distractions. But that is the point. To have every unlockable of every persuasion.

This kind of mod would be handy for Sniper Assassin in Haven if you plan to snipe Bradley on the Water Scooter but from far away. Simply hold aim over his path and spam the fire button… Makes you look like a sharpshooter which is the real life point of this tool.

Disclaimer: I have this weapon mod in RE:R but I actually never use it.

This kind of mod would be handy for Sniper Assassin in Haven if you plan to snipe Bradley on the Water Scooter but from far away. Simply hold aim over his path and spam the fire button… Makes you look like a sharpshooter which is the real life point of this tool.

But if you’re aiming where a target is going to be but isn’t yet surely the gun just wouldn’t fire, right? Unless the gun extrapolates the where the target would be if the continue at their current velocity but that sounds far too complicated tbh😂

The weapon system of trilogy partially inherited from absolution. You get Mark I, II and III with no difference except in-game models. I guess it’s easy for making the game. I do wish they could bring back the customisation system like bloodmoney: drum magazine, rifle bolt and different scopes, tons of options. Not to mention dual silverballer

I find it really disappointing how every game in the series recycles the same few mastery rewards - lockpicks, remote bomb, sniper, shotgun, etc.

If you’re referring to Reskin Items, it simply boils down to a barrier of entry so to speak. This is a unfortunate byproduct of the Episodic Model that was used in HITMAN.

With three games in this trilogy being readily available to the consumer in HITMAN 3 negating a Lockpick which for many is considered a integral tool for playthroughs behind a paywall that being HITMAN GOTY Access Pass would cause issues for the general flow of the game especially among a more casual audience.

Due to this being the case in HITMAN 2 and 3 IO added the highly controversial MK.ll Items and the easily superior MK.lll Items as apart of the location mastery track for their respected levels.

While it’s a annoyance among the Hardcore cause now we have numerous versions of already existing items most notably the Silverballer MK.ll which I personally argue is the most pointless unlock in the whole Trilogy due to it just adding a Magenta Sticker.

HITMAN 3 was a step in the right direction for unlocks since they visually add something new to look at and I’ll take that over anything that could drastically alter the came and it’s core experience.

HITMAN 2 was both a step in the right direction but also had a lot of setbacks. MK.ll items aesthetically are simply due to budget constraints surrounding that title alone. But IO also released a lot of good items in the Content Cycle while adding a glorified cheat item.

The Black Almond’s Dagger was a two for one item to bring in the map since it also had poison stored in it, this could aid people in a playthrough if used.

The Electric Phone is probably the best example of a game breaking item since it effectively makes Elusive Targets easy despite being advertised as hard, and is a cheat item that grants a guaranteed accidental kill with no error which can also result in a easy silent assassin. I won’t go open that debate again, I personally didn’t care simply cause I prefer the challenge and can just ignore the item.

Yet there’s a bunch of unique things they never added, like body armor. Do we have a theory why the unlocks aren’t more unique in each game?

It could simply be attributed to Balance. Body Armor was only used in Blood Money which reduced damage taking. This was when 47 still had a health bar, with that in mind 47 now regenerates his health now at a relatively fast rate unless being shot thus restarting that process.

the easy solution is to make hitman 2016 free… almost everyone that wants it already has it anyway, and it would encourage people not quite sold on hitman 3 to have a trial run without any of that messy starter pack nonsense

I think that it’s because of balancing issues. There’s a video of an alpha or beta build of H1 that includes a lot of items that were eventually not included, and you’ve already seen the controversy over the electrocution phone.

originally created by @stickpeted Welcome to the cut guns/gear of the Hitman Alpha. Before we start I want to say right now that this is not meant to show how IO has ‘gimped’ or ‘downgraded’ the main game from the alpha. Although I hope that some of these items make a return to HITMAN in some way or another, I completely understand why they were cut and I hope nobody attempts to attack IO for not including them in the main game. I also want to mention how many animations and gun models were …

Tracking Point, who patented the technology, claims it can turn even an untrained shooter into a marksman “accurate up to 1,000 yards”. 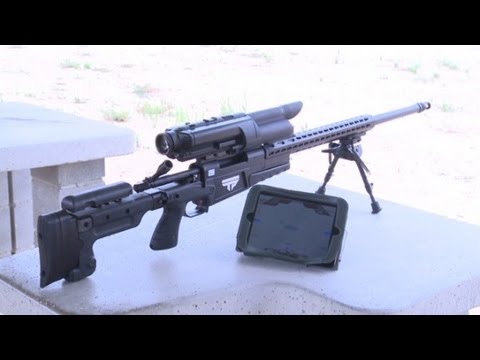 How does it work? Well that’s why it’s patented.

It’s basically also a special electronic trigger system, gets rid of the jerking or other mistakes. Basically it’s your car’s traction control and anti-lock brakes - but now applied to marskman rifles.

I guess in HITMAN 4 a version of this weapon could be simply a sniper rifle but with a larger virtual bullet profile in-game… meaning what should be a miss becomes a hit simply because you’re firing a larger invisible slug. And that would simulate the gun helping you become super accurate.

Also since we know as far back as HITMAN ABSOLUTION that AI nodes actually render out the paths that they will travel on then it is possible also for HITMAN 4 to have a scope with “predictive capability”. All it has to do is allow you to Mark a target (just like Tracing Point do in the CNN demonstration) and then the scope simply “cheats” - using the AI path and speed formula to let you know exactly where to aim and when to pull the trigger.

And then bang. You just turned yourself into @CHAOS_AGENT_45 (no offense… he’s still the real deal).

But back to the OP’s point… there is definitely enough real life material, but it requires some level of time and investment. If done right, HITMAN could easily become “The Gran Turismo of outdoor gear and weapons that would be illegal in your country”.

the easy solution is to make hitman 2016 free

They already did… My PS4 HITMAN 3 + Access Pass actually includes a totally free edition of HITMAN 2016 and a free GOTY edition on top of that as a result of having briefly owned HITMAN: THE COMPLETE SEASON for free on PSN when it was the free game on PS+ and immediately claimed Legacy Pack on HITMAN 2 for PS4 - locking my “ownership” of Legacy Pack H1 without paying a dime…

Will admit there is an element of luck involved.

Well at any rate, Tracing Point are the only solution of this kind on the market.

Well if IOI are seriously considering expanding on this area maybe your father could apply to them as a consultant. Half-serious suggestion.

Even if the idea were to think up of totally fictitious gear and weapons, someone of your father’s experience would be able to come up with new things that are halfway to plausible.

In 2017 computer security experts Runa Sandvik and Michael Auge demonstrated that naive software design left the rifle’s aiming computer wide open to remote hacking, when its WiFi capability was turned on. Malicious third parties could disrupt the rifle’s accuracy by altering parameters like bullet weight. They showed they could change the bullet weight from 0.4 ounces (11 g) to 72 pounds (33 kg), which would be counted on to make the rifle inaccurate.

Now that’s an opportunity for 47.

In a mission where a Target is a (cheating) champion shooter… This can be a Mission Story. And of course the Mastery 20 unlockable is this Tracking Point rifle.