On a brief hiatus

). So you can view this as an outlet for people to make and play more adventurous ‘contracts’. Plus everyone loves a good competition

So I’m reviving this old chestnut, but sweetening the pot with a greater prize: €30 for the highest scorer and €10 to a random person who submits a run, so everyone at least has an incentive to try. At the end of the day tho, I just want as many people to have fun with these as possible.

What are Community Trials?

Community Trials was a concept I came up with back in 2019 and did a sort of trial run with. The easiest way to think of them is the community creating the final level of an escalation. So one mission (or trial if you will) with niche objectives that are level specific and can add a bit more variety and challenge then what we usually get in standard contracts.

The reason they’re called Community is because obviously they’re for the community, but also I don’t wanna be trying to think of new ideas every week. I want other creators and members of the community to be able to show off their ideas.

Note: Prizes will be given out via PayPal

If you’re a contract creator and have an idea you think would make a good trial feel free to drop me a DM. I’ll be trying to release one of these every ~10 days with the same prize 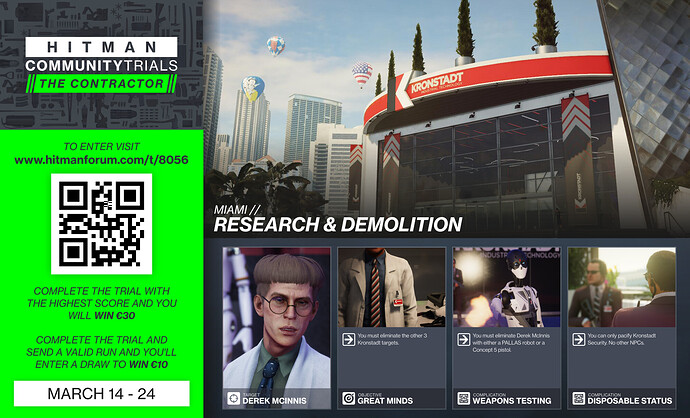 The next trial is already lined up, so just as a little tease

Thanks for such a cool event @TheContractor ! Look forward to a run from me

Oh, awesome! I was in the middle of doing that myself. Thank you, now I can play normally

And yeah, thanks @TheContractor! What a cool idea!

That’s a great idea! Will try this contract as soon as I can.

I think this is awesome! Huge kudos to @TheContractor for funding and doing the background work for something that brings the community into a friendly competition.

Friendly competition plus hopefully letting some people flex more creative contract ideas. Well thanks all for the interest

but I do expect runs from you all now

Cool idea! Who pays for this, though? Is it always you @TheContractor ? It could be something community pooled.

I’ll be funding the prizes for the foreseeable future but hopefully it’ll be different creators of the trials each time (if enough people are interested). For example, the next one has already been made by the wonderful @Khakiasp

Do users keep their score hidden until the deadline and just announce they have set a valid score?

That way anyone who feels comfortable with their run could chip in for example 2 euros to the prize money. The grand prize would wary each time but it wouldnt have to paid by you alone.

What do you guys use to record your runs?

Do users keep their score hidden until the deadline and just announce they have set a valid score?

Just announce whenever you want. You can always update your post if you get a better score

I’ll only check them after the deadline has passed anyways

What do you guys use to record your runs?

Depends what platform you’re on? I don’t know much about PC or Xbox features

nvidia geforce built in recorder is pretty neat, xbox game bar and obs are good too

honored to be a part of these wonderful community trials

xbox gamebar is neat tho

Does the complication “Disposable Status” mean that you’re not allowed to pacify targets?

Yeah, not even targets. Just Kronstadt Security guards only

Great initiative and fun contract! I’ve been looking for a good opportunity to use that pistol. First time participating in one of these, so here’s my submission for the PC recreation. 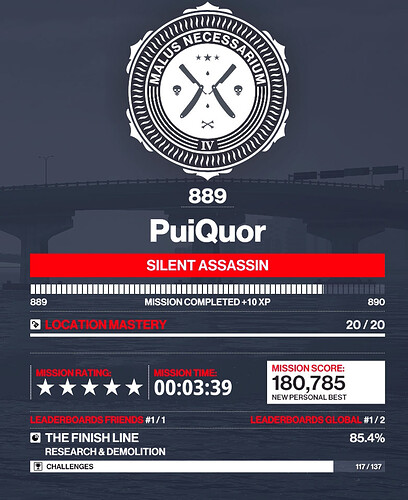 Just to make sure: any disguise, any kill method, except for Derek which has the pistol or robot kill condition.
I went for no pacifications at all just to be sure.