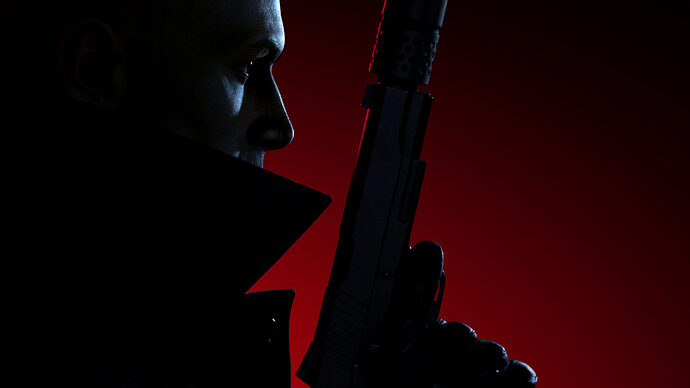 Here we go! Pre-orders for HITMAN 3 will start rolling out today and we are excited to reveal the release date, editions, pre-order bonus and our free next-gen upgrade plan.

(Before we start, you should know something: You’ll see the pre-order pages on different stores at different times, so don’t tweet us asking when they’re coming for your specific platform. We’re working on it.) 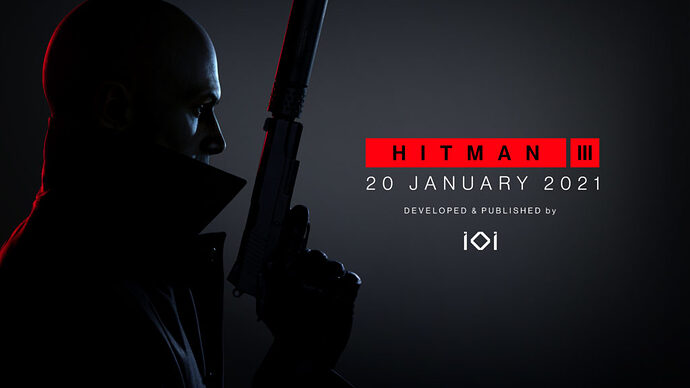 We’re creating two editions of HITMAN 3; The Standard Edition and the Deluxe Edition.

The only difference between the two editions is the Deluxe Pack, which includes Deluxe Escalations, in-game items and suits as well as digital soundtracks and more. This is everything that’s packed into the HITMAN 3 Deluxe Edition: 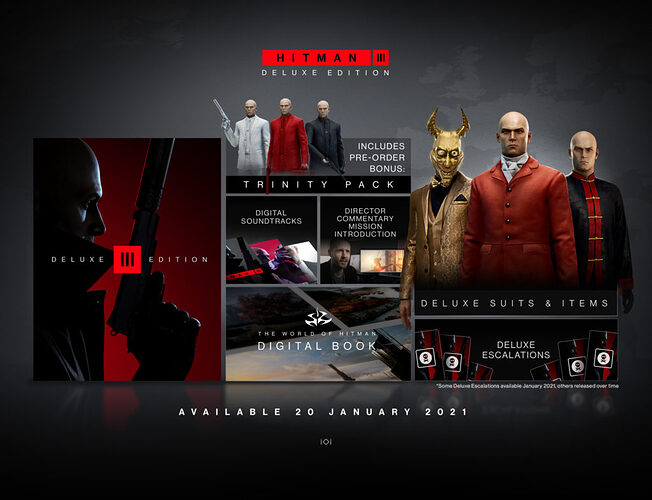 The HITMAN 3 pre-order bonus celebrates all three games in the World of Assassination trilogy. Introducing the Trinity Pack. You’ll get it just by pre-ordering the game, no matter what platform or edition.

The Trinity Pack includes a total of 9 items, with 3 distinct sets that represent a different game from the trilogy. Each set includes a suit, briefcase and weapon. From the White of HITMAN 1, the Red of HITMAN 2 or the Black of HITMAN 3, you’ll have all 9 items in your inventory to mix and match as you like. The classic Hitman insignia is etched onto the items in gold to add an elegant flourish. 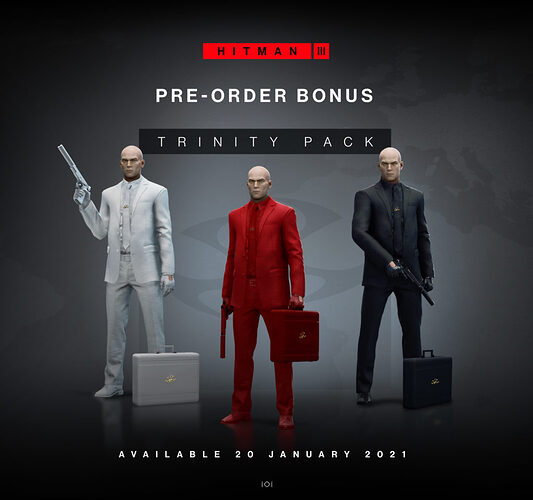 Yes, we’re doing a next-gen upgrade for consoles and yes, it’s free . Console players can buy (including pre-order) a digital edition of HITMAN 3 on the current generation of platforms and receive a free upgrade to the next-gen version of the game for no additional cost.

To break that down a bit more, here’s how it’ll work: On PlayStation, when you buy a digital PS4 version of HITMAN 3 from the PlayStation Store, you can download the PS5 version at no extra cost when it launches. On Xbox, HITMAN 3 leverages Smart Delivery allowing access to both the Xbox One title and Xbox Series X title when available.
(Original Thread by @cake941)

At selected retailers, pre-ordering a physical edition of HITMAN 3 will also include an exclusive physical passport. This unique item is filled with details and references from Agent 47’s career and commemorates 20 years of Hitman. 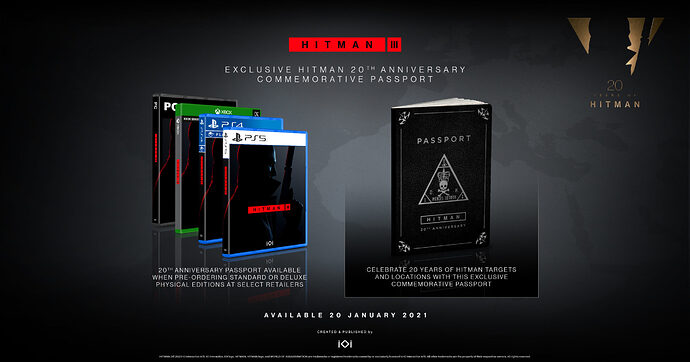 Direct links to all of the retailers listed above can be found at our pre-order hub at Hitman.com

Our next-gen upgrade also works for physical copies of the game. Take a look at our recent Physical Editions Confirmedblog post for all the details about the game in a box. 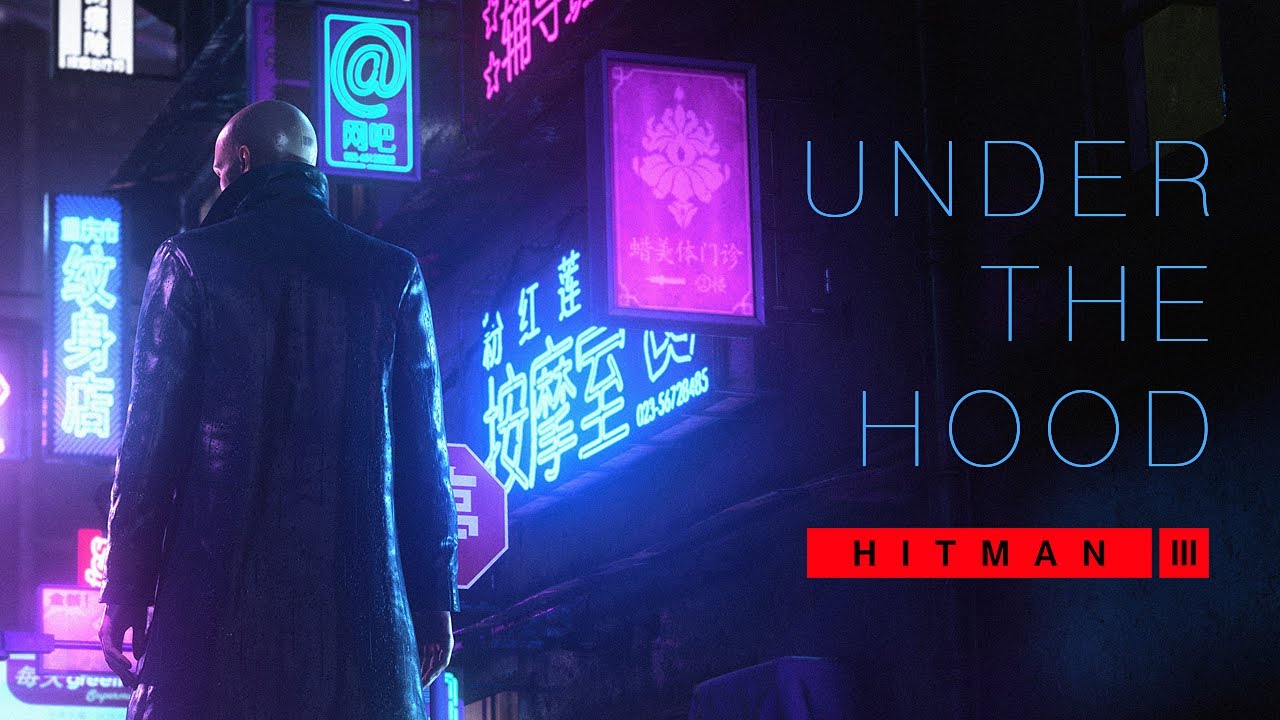 do you guys think the deluxe escalations will be simply to unlock the suits like in the Patient Zero ones? i hope that there will be one for each of the 6 maps at the very least

It seems the passport image from LRG is just a placeholder.

And I just noticed that for the US, Deluxe Edition is available on Best Buy too. Good news if you don’t like LRG. Although the physical edition blog post still says it’s only available via LRG.

GameStop Germany doesn’t list the passport (yet?). But the Austrian shops seem to deliver to Germany if an alternative is needed.

It didn’t unlock the suits in the GOTY edition it unlocked weapons.

Ahhh… I was hoping we get the Collector’s edition…

They could always do a collector’s edition release for the trilogy compilation.

I guess this is the best place to ask this:

@Travis_IOI: I pre-ordered the Deluxe Edition via PlayStation Store for PS4 (before the PS5 launch date was confirmed), is the free PS5 upgrade going to be available to “purchase”/redeem from the store while we’re in the pre-load period in the days leading up to launch so the PS5 build can be pre-loaded, or is that only going to be available after it launches?

I wanted to clarify one thing, because it seemed to me not as obvious as at first side. Trinity Pack in the Deluxe Edition will be available at any time you purchase the game, or also only by pre-order?

Trinity Pack is a preorder bonus to any platform and edition as is stands right now.
It might be on sale later, but no guarantee and the chance is not that high

Well I’m currently in Tier 4 in the UK and assume that will last for quite a while beyond the release date so now have to wait and see what Game do to handle this one.

The one preorder bonus, the Requiem Pack, got released some time after:

H2 had no preorder bonus in that way, but the collectors items were given to Gold users as well despite not intended at release time.

I would expect the Trinity Pack to be released around a year later if not less, but that won’t be advertised prior so no guarantee.

Thanks, because I really thought at first that it was included by default and it doesn’t matter when to purchase the game. And I wasn’t going to pre-order.

Ordered a limited games edition as I wanted the passport, turns out it’s now available at GAME UK so I’ve ordered a physical copy from there as well

GameStop Germany doesn’t list the passport (yet?). But the Austrian shops seem to deliver to Germany if an alternative is needed.

They don’t have the PC version, so I couldn’t have ordered there anyway, but wanted to correct myself either way: The Gamestop website does mention the passport - I just hadn’t seen it because it was below an ad for related products and I hadn’t scrolled past that

Austrian stores do have the PC version. You might have missed it. 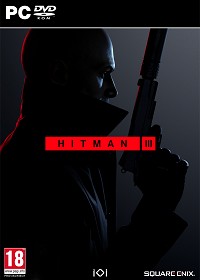 I meant the GameStop site

It offers the passport (unlike I thought earlier) but not the PC version.

Sadly it’s not for PC

Oh they will, mark my words.