A thread to discuss the second act of the newest DLC, yet to be announced (probably Pride).

This post will be updated with relevant details about the Act once announced.

Pride and an escalation in Chongqing. They’ve all been bangers in that location so let’s hope they keep that up

What item will have a gimmick tied to it.

Plus, if it’s the sniper we can get a full research paper from Chaos on it, as an added bonus

The new suit’s clearly have a similar theme. I doubt that we will get the Butcher Suit for gluttony at this rate. 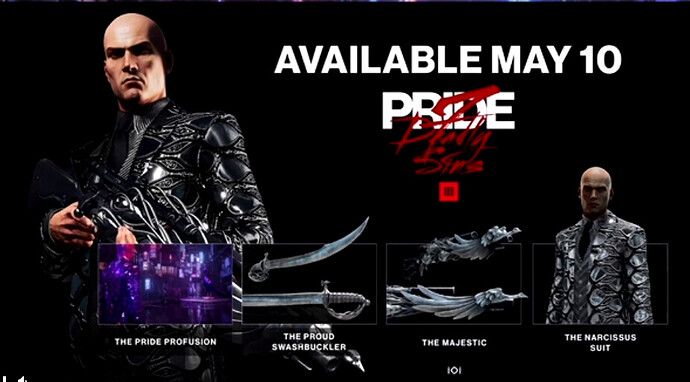 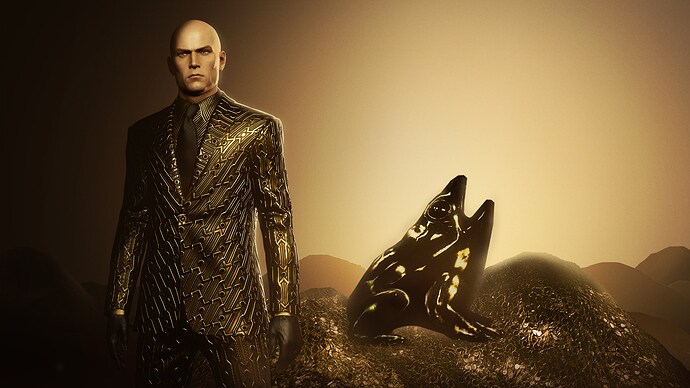 I don’t know, Greed and Pride are two of the more ‘classy’ sins imo. When you get around to stuff like Gluttony, Lust and Sloth I can’t imagine a shiny suit would fit them too well

Tangent point, which do you think looks better?

Greed suit (I know that’s not it’s name but) has really grown on me since I first saw it. Thought it was fugly

I doubt that we will get the Butcher Suit for gluttony at this rate.

I felt the same when I saw it but I’m still optimistic I would say. Hopefully no more bling suits after this though

Greed suit (I know that’s not it’s name but)

And I still need to look it up

I feel like it might end up being a escalation unlock closer to Halloween. I’m praying we get bonus missions regardless cause I like using load outs, but at this rate I really don’t know what to expect outside of Escalations.

i only picked Pride Suit because it’s a 3-piece suit instead of a 2-piece suit (like the Rapacious suit). otherwise, they’re kind of same-y to me, at least in vibe

Yeah, the new suit is a simple reskin or even just recolor of that first one as I see it

Thoughts on what might be the Pride gameplay addition of the escalation?

They say it’s to “prove you are the best, to make you proud of your work”.

Right now, I’m thinking interacting with the Peacock will change or increase the difficulty of the kill conditions. Or maybe, there’ll be more than 5 targets and the more you kill, the more points you accrue to unlock the special item held by the Peacock.
Just basing this on what we’ve seen with the Frog.

Or maybe, there’ll be more than 5 targets and the more you kill, the more points you accrue to unlock the special item held by the Peacock.

That feels like greed more than pride. But I love your first idea, all I can say is please don’t get my hopes up too much

If IO don’t make it tho, I might steal that idea for another Challenge like The Greed Perturbation

“sigh” Okay, so another escalation and more reskins.

I believe. I receive.

Greed wasn’t timed, and since this is paid content, it’s overwhelmingly likely not to be timed either.

Few thoughts I had, probably belong in “Unpopular things” but whatever.

I hope we don’t get the butcher suit. The old games were fine but they’re in the past. Let’s keep looking for the future for more rather than going backward. We’ve enough homages and retreads of old games at this point.

I don’t mind escalations as a concept so I’m good with it. I do not expect to get anything beyond that for this DLC despite the wishes and hopes of most.

At this point, what new item wouldn’t be a reskin of something that already exists? For all the talk of a butcher suit, or something besides yet another gun or sniper, what else is there? The Goldballer everyone wants? That’s a reskin of the Silverballer in gold. A new suit is, by definition, a reskin of another suit. Unless they want to code in a genuinely new item, they’re all going to be reskins.

Travis said in today’s stream that the original point of the DLC was ONLY to provide a few new items and a suit every month. The fact that we get an escalation on top of that is a bonus so let’s stop saying it’s disappointing. Don’t buy it if you don’t want it.

There has been zero indication that bonus missions (or even special assignments) would be included in this. Any news that we’d be getting anything “more” than escalations as part of the DLC is wishful thinking on behalf of the community so any disappointment is entirely community-driven. If we get more, great, fantastic and let’s celebrate! It’s not mandatory nor cause for discontent though.

I agree on not having time limits on the escalations. That’s one of the worst complications I know of. It’s one of the surest ways to get me to not play a contract.

“Travis said in today’s stream that the original point of the DLC was ONLY to provide a few new items and a suit every month. The fact that we get an escalation on top of that is a bonus so let’s stop saying it’s disappointing. Don’t buy it if you don’t want it.”

Wow! I never knew that. Weirdly, that makes me a bit more inclined to buy this DLC, if it was never supposed to include new gameplay.